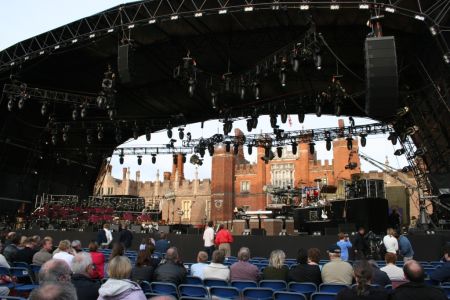 Well, as much as we love going to see Gordon Giltrap- he was in Portugal this weekend, a bit too far even for us - but we didn't miss out on our dose of music. Thought I'd share with you our fantastic weekend.....

Sat morning we headed up to Hampton Court Palace to meet with a group of our Witchwood friends ( Strawbs fans) to see Rick Wakeman perform his Six Wives of Henry VIII th live in front of the palace. The two night show is the only time this music has ever been performed live in its entirety, plus Rick wrote some extra tracks to add to it. We went round the Palace and gardens, ( To see my pictures click here  ) then picniced in the sun on the lawns before the show - all very civilised - and I was also presented with my prize from the Strawbs quiz by Cliff and Simone.

There was a huge stage, massive lighting rig, full orchestra, chamber choir plus Rick and his electric band, the ERE including son Adam. Brian Blessed was narrator ( Brian said it was the largest audience he'd ever performed to - almost 5000) Acoustic Strawbs were excellent as support, and were an appropriate choice considering they all played on the original RW Six Wives recording.

The Palace was all lit up with constantly changing colours and effects as the backdrop, with projections on to the west front. None of those large video screens surprisingly, which would have been nice as we could have watched Ricks hands. Will have to wait for the dvd for that I suppose - loads of cameras on huge booms etc, plus hand helds on stage and statics everywhere - they really did it all properly.

Twice during the show, a set of stairs rose out of the floor and a huge raised set slid out from the side to centre stage - once with a church organ, the other with a grand piano - so Rick climbed the stairs to play one track high up. Always one to make an impression, Rick sported 5 or 6 different capes during the evening but despite having the Six Wives on stage in full costume, and entering to a fanfare, he managed to resist dressing as Henry!

As you would imagine it sounded and looked amazing, but not a cheap night out. We had mid priced tickets at £72 each with programmes at £10, but it must have cost an absolute fortune to stage.

Started 7.30pm finished just after 11pm - by 10 past you could buy a 2 cd live recording set of the concert plus a cd of photos, exactly as Gordon jokes about burning off cds in the car park ! All you need is a huge crew and loads of money and you're in business.

Pictures we not allowed, but some I took before and after the show and during the interval can be seen if you Click here

Anyway, we stayed overnight near Hampton Court and this morning headed in the direction of home - but the weekend wasn't over yet. Rochester was holding its annual Sweeps Festival, so of course we had to divert off there. Watched our friends Colin Reece and Ian Cutler from Bully Wee perform at lunchtime, then battled our way through all the Morris dancing displays to see Ian once again play with the Hot Rats in front of the Cathedral.

The day concluded with yet another Witchwood gathering and this time an Electric Strawbs gig in the Castle gardens, featuring none other than Oliver Wakeman making his first English appearance on keyboards with them. Half close your eyes and you would swear it was Rick himself on stage. To be honest, what with Adam last night at Hampton Court and Oliver tonight, I think Rick had better watch out - he's got some serious competition ! Pictures from the Strawbs gig can be seen here

So, exhausted, broke but very happy we headed home.
Tweet