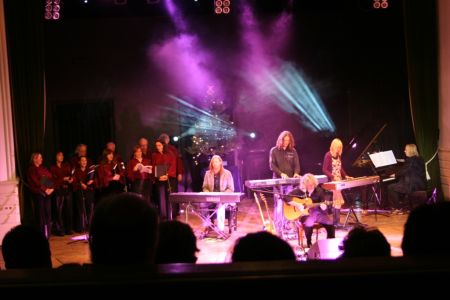 As most of you will know, I run Gordon Giltrap's website. This often allows Mike and I privileged access to shows, and this weekend was rather special – the Rick Wakeman Christmas Concerts.

We were already worried if we would even make it to the event due to snow in other parts of Kent on the Friday ( we missed it here in Ramsgate) and then it started snowing here at 8am on Sat and we had trouble getting back from the town centre, but we made it all the way there without any difficulty once we got going.

Anyway, Saturday lunchtime we drove up to Swindon, to the Marriott hotel where we booked in for 2 nights. Then we headed off to Marlborough College where Gordon was the special guest of Rick for two nights of brilliant gigs.

These were not your usual RW gigs, the lineup included members of the English Chamber Choir – last seen on stage with Rick at Hampton Court for his 6 Wives Extravaganza, his children Oliver ( who plays keyboards with Yes and Strawbs - so we'd met him several times previously - as well as his own band ) Adam ( who has just finished a tour on keyboards for Will Young, and is rejoining Ozzy Osbourne touring later in the year ) and Jemma ( who plays keyboards and sings ) and the whole event is Christmas themed, so it included various carols.

We arrived at the historic venue - an exclusive public school - around 5pm and joined everyone backstage. They are all so friendly, and had their wives and small children ( Ricks grandchildren ) with them. The whole weekend is really a big Wakeman family / fan party. We were welcomed by everyone, chatting away like old friends.

The hall was packed both nights - about 400 people a time. Rick played some solo pieces as did each of his children and the choir and then there were various combinations. They were long shows as there was so much Rick wanted to include.

Gordon played 6 numbers in each show, - complete with amazing laser lights and superb sound system - his last number each night was a duet with Rick - Maddies Goes West, and then he joined everybody for the finale, "White Christmas " Although a lot of people present were familiar with Gordon, many knew his name but had never seen him play - he made a lot of new fans and went down extremely well with The Dodo's Dream being a high point.

Most of you will know Gordon and Rick are good friends and recently released an album "From Brush and Stone". At one point Gordon was asked to "spot" folks who weren't singing - they were marched on stage and made to join the choir ! Very funny - as were Ricks jokes, even if they were rather rude !!


After the show we all went back to the hotel and carried on partying with everyone there until about 1.30am. Sunday morning was a leisurely breakfast with Gordon, Hilary and some other friends / RW & GG fans and crew, followed by the annual RW fan Club Christmas lunch. About 150 or so people joined the Wakemans for lunch, and Rick took charge of running an hilarious charity auction that raised over £925 for the Teenage Cancer Trust, and with collections at the gigs the grand total came to £1136.98

Hilary ended up holding one of Adam's twin babies while he joined his Dad for a quick duet ( sharing one keyboard ) After an afternoon snooze Mike chauffered myself, Gordon and Hilary back to the venue for the second night. This show was similar to the night before, but ended with Gordon, Adam, Oliver and Jemma going round the audience with plates of mince pies !

You can view photos from the two nights here

Once again, back to the Marriott to carry on the fun until the early hours. Rick however drove home to Norfolk straight after Sunday's gig as he had a live radio interview at 9am Monday morning !! We on the other hand had another relaxed breakfast with G & H before leaving late this morning and driving to Avebury for a quick look round as we hadn't been there before. We could hardly believe our eyes when we encountered a couple in full Celtic costumes, cloaks, a deers head head-dress complete with antlers, horn drinking vessels etc and ( wait for this !! ) posing with a double neck Epiphone guitar by the standing stones !! Shame Gordon wasn't with us !

Our journey home wasn't so good as half way along the M4 it was snowing heavily and was quite scary when it was impossible to see lane markings etc. It was very slow from then until the M3 and we did wonder if we'd actully get home at all, but then the snow turned to rain and it was a little better for a while. More snow, sleet, rain, ice, fog and heavy traffic later and we got home about 5pm yesterday - tired but very happy !! Another excellent weekend - good friends, great music - thats what is all about for us.