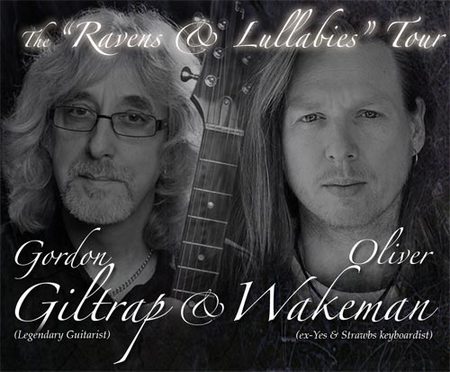 Guitar Legend and the next generation of keyboard wizardry join forces!

September and October 2012 will see guitar legend Gordon Giltrap and keyboardist Oliver Wakeman (fresh from 4 years of touring with the classic progressive rock band YES) performing together for the first UK leg of their 'Ravens & Lullabies' tour.

In early 2012, Gordon contacted Oliver with a request for his keyboards services for an album idea he had. Within 24 hours the initial idea had changed beyond recognition and a full blown collaborative project was in the works. Oliver and Gordon have embarked upon this new chapter in their careers and are currently finishing their debut album 'Ravens & Lullabies'.

Featuring a variety of guitars and keyboards, which are their tools in trade, these shows will be the first public performances of a selection of pieces from the new album as well as new arrangements of classic material from both of their retrospective careers.

One of the most innovative acoustic guitarists in the UK today, Gordon Giltrap has developed his own unique style, much copied, but never bettered. It is impossible not to be awestruck as he coaxes incredible melodies from his instruments; you almost suspect a second pair of hands. He is well known for his varied musical output and 'Heartsong' (a hit single from the album 'Perilous Journey' in 1977) is instantly recognized as the theme for the BBC TV's long running 'Holiday' programme.

Following ten solo albums in a variety of styles, Oliver Wakeman joined the legendary band 'YES' in 2008, touring with them up until mid-2011. A live CD and triple vinyl release, 'In The Present - Live from Lyon', was a fitting bookend to his period in the band. He also worked with the folk rock band 'The Strawbs' and appeared on their last studio album as well as their 40th Anniversary CD release. Appearing in venues across North and South America, Europe and the UK with YES, Strawbs and as a solo artist, he has become a well respected live performing musician to add to his other talents as composer, songwriter, lyricist, arranger and producer.

Gordon says "Working with Oliver is like a breath of fresh air. I knew of his reputation as a fine musician, and it made perfect sense for me to tap into his creative energy, not only to bring out certain elements of my musical gifts but to create something new and exciting, at the same time giving a nod in the direction of our respective Progressive Rock roots"

Oliver adds, "After working with YES, the chance of working with another legendary artist was an opportunity too good to miss. I am having a wonderfully productive time working with Gordon and feel we are creating something genuinely unique in our 'Raven's & Lullabies' project."
The tour starts on the 22nd of September 2012 at Huntingdon Hall in Worcester and continues through into late October.

So, with their collective histories and talents to draw inspiration from, be prepared for an evening of beautiful compositions, wit and charm from these two virtuosos.

The tour is now under way and receiving great reviews. I filmed the first night and put together a trailer to give people the feel of the show. If you enjoy this, why not try to get along to a show ? Dates below.....