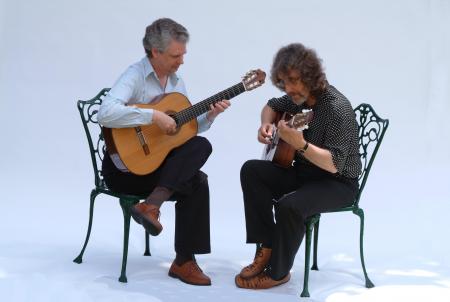 Gordon Giltrap and Raymond Burley, both well established solo artists have combined forces - together they are Double Vision

This exciting partnership allows both artists to expand and continue to bring new dimensions to their performance.

Gordon and Raymond are equally well respected; each have been masters of their craft for nigh on forty years. Since their chance meeting at a national gathering of guitar teachers in 2001, the obvious chemistry between these two virtuosos has flourished. They immediately broke down any preconceived ideas about the collaboration between a classical musician and a rock musician.

Gordon is an outstanding and innovative steel string acoustic guitar player and composer, who has developed his own unique style of playing. With nearly 40 years in the music business, he has produced among other things, an impressive catalogue of music for TV. This includes the hit single "Heartsong" which was the theme for the BBC's Holiday Programme for many years, and was nominated for a prestigious Ivor Novello award. He was a principal player in Cliff Richard's musical "Heathcliff" writing two pieces for the show and appearing nightly as the Troubadour, a role which triggered a cd by the same name. 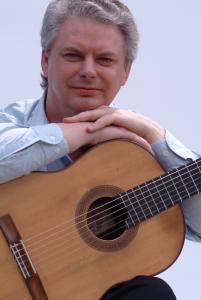 Raymond is a highly skilled classical guitarist who also performs solo, as part of the Rodrigo Guitar Trio, and has worked with many of the UK's finest orchestras. He has numerous recordings and radio appearances to his credit, and a track record of successful creative partnerships with some of the most respected names in the world of classical music. He has toured widely in the UK, Europe, South America, USA and Canada.

Double Vision brings a fusion of these two genres. The sound of nylon strings combined with steel strings creates a sound quite like no other. With Raymond's classically inspired arrangements the music feels new and refreshing, taking Gordon's compositions to new heights.

The music of Double Vision has been described by many as "sublimely beautiful." This description itself should be enough, but when combined with Gordon's more strident pieces like the classic "Heartsong" or the earlier "Fast Approaching" it creates a new level of musical experience for the listener which defies categorisation. There are some short music sample MP3 files at the bottom of the page for you to enjoy.

In concert, all of this is presented in an intimate and accessible manner, with no hint of pretension, making for a highly entertaining musical experience.


Steve Marsh wrote a review of the "Double Vision" CD in the Dec 2005 edition of Classical Guitar Magazine and reported :

"This is a recording to savour and will surely satisfy classical guitarists and folk guitarists alike. When reviewing two players of this standard it seems almost an insult to state how well they perform, but there have been fusions of top musicians before which have simply not worked for some reason or another, but I'm happy to report that Burley and Giltrap gel so well in this enterprise that it would seem they had been playing together much longer than just these few years. Highly recommended."

For detailed individual biographies and reviews please see Raymond's and Gordon's websites or for more information on booking Double Vision, please get in touch using the details on the Contact page.